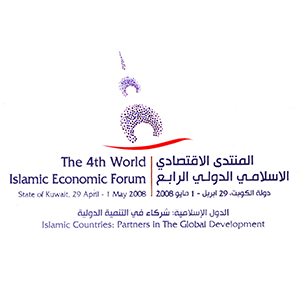 The fourth World Islamic Economic Forum entitled “Islamic Countries: Partners in Global Development” was held in Kuwait on the 28th April – 1st May 2008 and was attended by more than 700 participants from all across the globe, particularly from the Gulf States.

The 4th Forum focused on the theme of Islamic countries as true players of global development on the Muslim world as a burgeoning market, the role of energy in a changing world, the role of investment in poverty reduction, the private sector role in development, and the role of education.

“Developing the Future Generation of Leaders”

We, the Delegates gathered together for the 4th World Islamic Economic (WIEF) with the theme “Islamic Countries: Partners in Global Development” in Kuwait City, the State of Kuwait from 28th April to 1st May 2008.

ACKNOWLEDGING the gracious hospitality of the Government of the State of Kuwait in hosting and ensuring the success of the 4th WIEF; APPLAUDING the generous commitment of S100 Million by H.H Sheikh Sabah Al-Ahmad Al-Jaber Al-Sabah and the Government and People of the State of Kuwait for the establishment of a food security fund to assist the poorest within the Muslim Ummah alleviate their hunger and build their capacity to achieve sustainable long term food security by investing in the production, storage and distribution of basic foodstuffs; APPRECIATING the presence and contribution of all Forum participants as well as their harmony and cultural diversity;

AFFIRMING our  belief that the spirit and objectives of the World Islamic Economic Forum remain the effective promotion of sustainable economic development, growth and prosperity of the Muslim Ummah by fostering cross-border business linkages and public-private partnerships and alliances both within the Muslim business community and with the rest of the world;
HEREBY TAKE NOTE of the wise guidance from the participating Leaders: