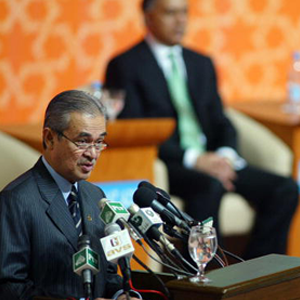 The second World Islamic Economic Forum bore a more confident theme of “Unleashing the Potential of Emerging Markets”. Held in Islamabad, Pakistan from 5-7th November 2006, the 2nd Forum attracted more than 600 participants from various countries in the Muslim and non-Muslim world.

Some of the key issues addressed in the second Forum included strategies to jumpstart economic development and enhance competitiveness in the Muslim world, creating successful entrepreneurs in the global marketplace, identifying new opportunities in the information, telecommunication and infrastructure industries, the prospects for public-private partnerships and leveraging the global supply chain. The second Forum also saw the establishment of the WIEF Young Leaders Network (WYN), the third initiative of the World Islamic Economic Forum, aimed at gathering young entrepreneurs and young professionals for business networking and to create programmes to enhance value-added economic activities for the Muslim world.

We propose that the governments of the OIC member states, with the involvement of the private sector, to continuously engage themselves with the ultimate goal of establishing the Islamic Common Market in stages. In this endeavour, OIC regional and sub-regional economic cooperation needs to be strengthened within a reasonable time-bound process.

We believe that there is an urgent need to redefine the relationship between the public and private sectors to make it relevant with time and responsive to the current global challenges.

We call upon the governments of OIC countries to play a more proactive role in business and economic development by taking concrete steps to 1) reduce administrative bottlenecks, 2) enhance labor laws, 3) facilitate the movement of people and capital 4) ensure greater accountability and transparency. We further encourage Muslim businessmen to uphold good business ethics and corporate governance.

We encourage greater intra-OIC investment by facilitating inflow of capital from capital-rich OIC countries to other OIC countries. We call for further development of the Islamic capital markets and financial instruments and expedite the cooperation among Stock Exchanges of OIC member states.

We encourage both the governments and the private sectors to accelerate the use of information and communication technology (ICT) to facilitate trade and investment. We believe that each member states should consider implementing a specific framework for developing a Knowledge Society by adopting the Action Plan of the World Summit on Information Society, Geneva, 2003. In realizing this, we propose greater emphasis on R&D cooperation among OIC member states through more proactive technology transfer, human resource exchanges, and technical assistance programs especially outsourcing from more developed member states to less developed ones. In this connection, we envisage the establishment of an ICT working group within the Forum to facilitate this idea regionally and sub-regionally.

We call upon the Islamic Development Bank (IDB) to further enhance its services in resource mobilization and develop new trade financing instruments.

We reiterate the need for the formation of a Global Halal Standards Organization (GHSO) to establish an international standard for halal certification and labelling so as to facilitate trade among the OIC countries.

We encourage greater and more active participation of both the governments and the private sectors in the development of small and medium enterprises (SMEs) in their respective countries and to facilitate SME cooperation among OIC member states.

We call on member states to encourage and facilitate the participation of the businesswomen in the economic development process of their respective economy. In view of the success of the 2nd OIC Business Forum, we propose to enlarge the OIC Business Forum so as to widen the participation to include academicians, NGOs and Muslim communities from non-OIC countries and accordingly we propose renaming the Forum as the World Islamic Economic Forum.

In adopting this Declaration, we recognise the need for an action-oriented programme of practical solutions to be implemented in a reasonable period of time.

We therefore request that this Declaration be submitted to the Chairman of the OIC for consideration of the OIC Economic Conference to be held from 23rd to 27th November 2004 in Istanbul.